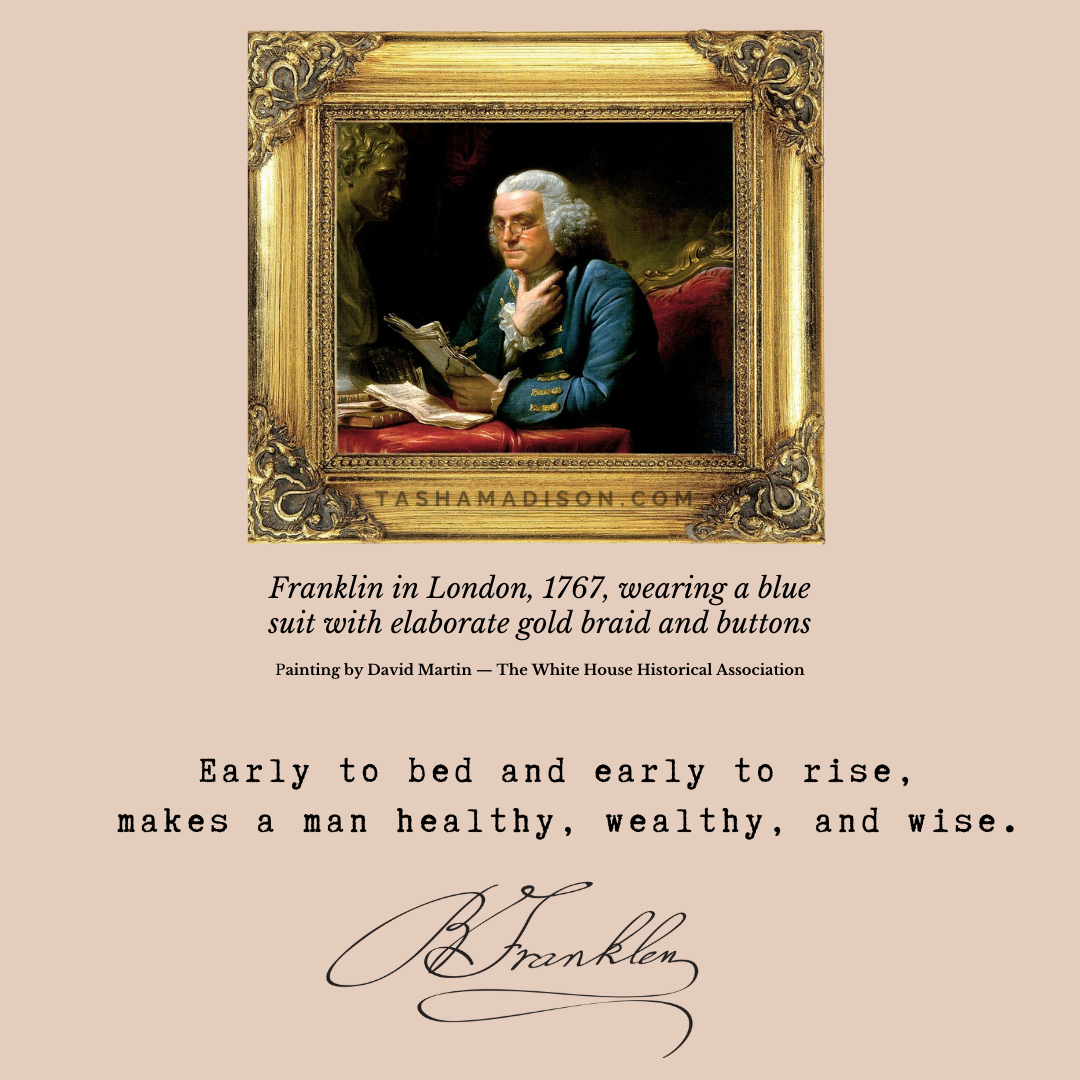 Have you ever wondered why you can't seem to stay up long enough to watch your favorite late-night show, or why you press the snooze button more times than you can count before you can coax yourself out of bed? The answer may surprise you ... Benjamin Franklin famously said, "Early to bed and early to rise, makes a man healthy, wealthy, and wise." But, scientific studies have proven that the early bird doesn't always get the worm, and, even when it does, the night owl may catch up!

There are two factors that influence whether you will rise earlier in the day or stay up late into the night. First, your circadian rhythm (your body's internal clock) is influenced by the Earth’s 24-hour light-dark cycle. Your circadian rhythm regulates your sleep, hunger, and eating patterns, your body’s hormone levels, and even your mood. Some sleepers have a longer natural wake-sleep cycle, which often makes them night owls. Those with shorter natural wake-sleep cycles, like myself, are often morning larks.

Second, your sleep schedule is also genetically predetermined and written into the code found inside your DNA, thanks to Paleolithic hunter-gatherers who sought to keep their groups protected throughout the day and night. As a result, some members would spend the daylight hours awake, while others would stay up during the night to fend off predators and outside threats. Over time, the genes of these two types of people were passed down, resulting in morning larks and night owls.

Okay, so now that you know which category you fall into, why does the distinction matter? Your chronotype affects your productivity and can help predict potential health risks. So, knowing whether you thrive at sunrise (or sunset) will aid you in determining the most suitable schedule for living your best life. 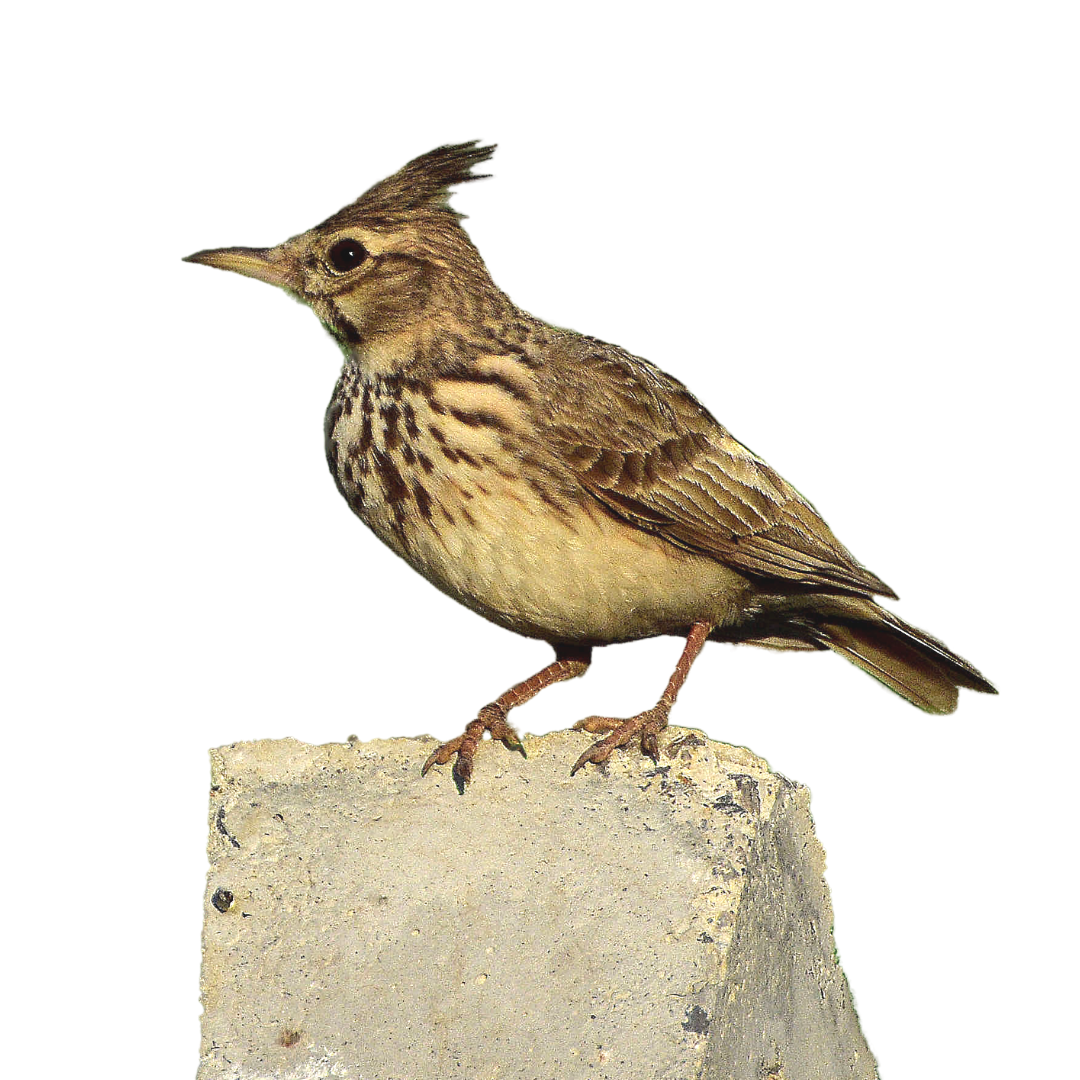 [1] Morning larks tend to be more agreeable due to their more positive outlook on life. As a result, they are happier in life than night owls. Because morning larks wake up early, they also have an easier time adjusting to social norms and responsibilities without adverse side effects.

[2] Morning larks are more likely to exercise during the day. As a result of increased movement, they also receive a higher quality of sleep.

[3] This leads to better overall health. Night owls, on the other hand, because they are less active during the day, have a greater risk of poorer health (i.e., are more likely to suffer from diabetes, depression, or substance abuse).

[4] Although morning larks have higher stress levels, they procrastinate less than those who burn the midnight oil. Studies have linked procrastination with an overall propensity to engage in evening activities. As a result, night owls are natural procrastinators.

[5] Despite this, morning larks often suffer from daytime fatigue, causing their energy to wane as the day wears on whereas night owls benefit from heightened mental stamina when they’re on their natural sleep schedule.

[6] Because morning larks go to bed earlier, their social life and creativity usually suffers. Studies show that night owls are more likely to be creative since they tend to prefer defying conventional norms. As a result, while the rest of us are slumbering, night owls intentionally devote more time to honing their craft, learning a new skill, or engaging in activities that lessen stress.

Want to change your internal clock? Although we may be hardwired to lean toward being a night owl or morning lark, most people fall somewhere in the middle. You can modify your sleep patterns and activity with small, lifestyle changes that can have a big impact over time. When you use your body’s own clock to your advantage, you can optimize your productivity on and off the job. For example, if you want to become a morning lark, exercise during the day, reduce your screen time before bed, adjust your room to a cooler temperature, and commit to a fixed sleep and wake schedule. 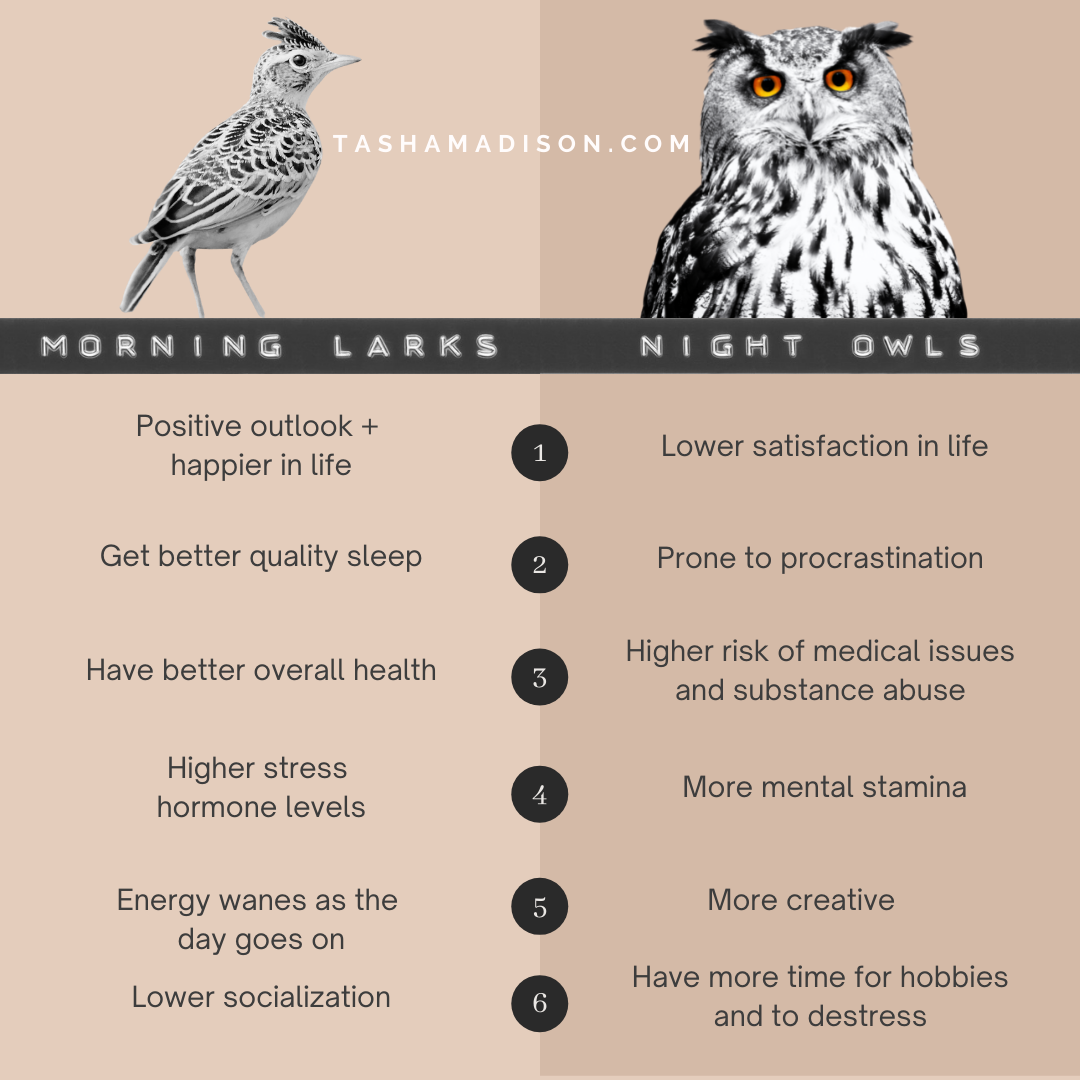